We are in the process of doing 17 of these machines for our customer. These machines were already full CNC machines upon their arrival. However, the customer had requested that we modify the original design to eliminate any intermediate drive gearing and direct drive as close as possible each axis of motion. In addition, we were asked to design and install a full enclosure, rear discharge conveyor systems and lastly a servo controlled robotic arm with a four station tool magazine. After completion these machines ended up having 9 axes of motion, 6 within path 1 and 3 within path 2. Path 1 controlled the shaping process, and path 2 controlled the tool loading process.

The machines are first totally disassembled and thoroughly cleaned. All the critical parts are inspected for tolerance, wear and feasibility of reuse.

All the guideways are removed for refinishing; the column has new Turcite installed and hand scraped. The spindle assembly and the worktable assembly are rebuilt in tandem to save time. The radial axis has a new direct drive ballscrew installed, with a new housing for the thrust bearing assembly. The column is fully assembled and tested before the guarding is installed.

All new hydraulic, lubrication, grease and coolant systems are installed. We modified the lubrication to have four monitored zones. We installed an automatic greasing system for parts which required grease instead of oil. New chip conveyor(s) were installed depending upon the location of the discharge that is required.
We designed and installed a three axis robotic arm, and a four station magazine for the tool changing function. Since these machines are capable of cutting up to four different surfaces sequentially the tool loader and magazine were required. To save time, we reverse the surface sequence after every part to save a tool change.
The back off cam was converted to a direct drive system, and the spindle was changed from a gears drive system to a belt drive system. The two systems were then electronically synchronized together to get the timing right for the back off motion.
The stroke length system was changed to incorporate a leaser measuring device to measure the location of the adjustment mechanism to insure there was no motion of the system while running. This check was critical in the safety of the machine to verify its position before cutting again.
The tool changer system was redesigned from a hydraulically powered arm to a servo driven arm. The new arm design ended up looking a bit like a Scara robot and it consists of two rotary joints and one linear axis for elevation. The gripper assembly has a hydraulic locking mechanism to capture the tool holder and prevent it from escaping the gripper during higher speed moves. The software used to control this system was developed to allow a single step function both forwards and reverse through all the steps of the sequence. It can be used for recovery from crash or emergency stop condition. A four station magazine holds up to four tools for the sequential cutting process.
A full enclosure with mist extraction was installed around the entire machine. Openings were designed strategically to allow crane access for loading and unloading as well as maintenance of the machine itself.
Give us a call to discuss what upgrades and enhancements we can offer you for your aging machinery. 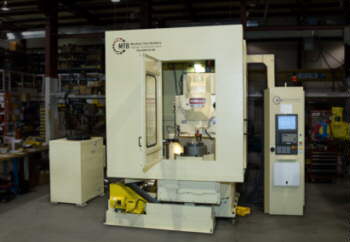