This machine was originally a fully mechanical machine with change gears for the indexing and Liebherr proprietary controls. It’s primary function was to rough and finish mill multi-fluted rotors in a single index fashion. We have done a complete machine remanufacture and conversion to a full 6 axis CNC control. All the mechanical change gears were removed, all gear boxes, extraneous drive shafts, pulleys, motors etc were removed. The axes drive mechanisms were redesigned to adapt servo motors as close as possible to the driving screws.

The Arrival
When the machine arrived at our facility, it was in very bad shape. It had been in storage for a number of years because it had not been working reliably. All unprotected surfaces were totally rusted, all the wires had been cut, piping damaged and missing, parts cannibalized, and generally dirty and oily.

The Remanufacture Process
The remanufacture process took approximately 9 months to complete and went through many different phases, to numerous to list here. But here is a collection of photos taken along the way to show the extent and attention to detail that goes into every MTB remanufacture and rebuild project.

The machine first was totally disassembled and thoroughly cleaned. All the guideways needed to be refinished, and the machine alignments checked per the DIN ISO 6545 acceptance criteria for gear hobbing machines. All the parts required inspection for tolerance, wear and feasibility of reuse.

Each sub-assembly of the machine was meticulously disassembled, cleaned, inspected and rebuilt back to the OEM specifications. All the bearings and seals were replaced, bearing surfaces re-scraped, way covers, wipers and bellows replaced.

Once fully assembled the machine was setup and prepared to mill the first test pieces. Test cutting was done on a variety of parts, both left and right hand in order to very that the machine was indeed accurate and capable of holding the workpiece tolerances.

As the machine neared completion, all the guarding and safety devices were installed and tested. A new chip conveyor and coolant tank were installed as part of the remanufacture process.

An entirely new electrical enclosure was designed and manufactured. We installed a new GE Fanuc 18i CNC with GE Fanuc Alpha series drives and motors were installed on the machine. Custom conversational single indexing programs were developed and implemented to ease the operator training, and make the machine very simple and efficient to use. 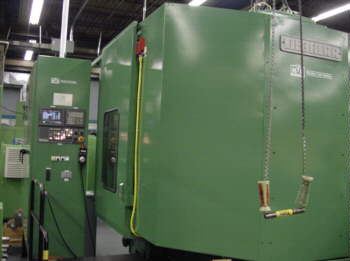